Wolves vs. Zombies: Secrets of an Overworld Survivor, #3 (Paperback) 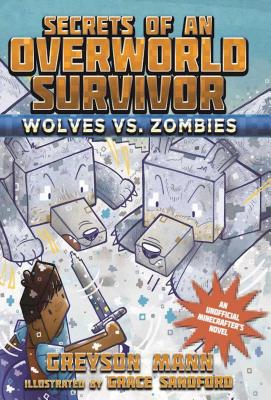 Wolves vs. Zombies: Secrets of an Overworld Survivor, #3 (Paperback)

This is book number 3 in the Secrets of an Overworld Survivor series.

What is more fun than Minecraft? For boys and girls who love the game, not much, except maybe an exciting adventure that takes place within the Minecraft universe!

With zombie attacks threatening their town, Will’s older brother urges him to act responsible by staying home to protect the villagers. But Will, ever the explorer, is already dreaming of his next destination: the snow-covered forests of the Taiga biome.

Despite the danger facing his home, Will sneaks off on his adventure, and he soon finds that the wintery region is everything he hoped it would be—right down to the pack of wild wolves he could try to tame as pets.

But when an urgent message from home tells him his brother’s in trouble, Will has to choose: stay in the Taiga biome and tame the wolf he’s always wanted, or return home and rescue his brother?

The third book in the Secrets of an Overworld Survivor chapter book series, Wolves vs. Zombies is an epic adventure—perfect for introducing young gamers to reading!

This adventure series is created especially for readers who love the fight of good vs. evil, magical academies like Hogwarts in the Harry Potter saga, and games like Minecraft, Terraria, and Pokemon GO.
Greyson Mann is the author of the Creeper Diaries series and the Secrets of an Overworld Survivor series from Sky Pony Press. He kept diaries like Gerald's when he was a middle schooler. He kept right on writing through high school and college and now creates books for kids from his home in Madison, Wisconsin. Greyson enjoys playing Minecraft with his nephew, sometimes writes bad rap songs, and hangs out with his three sisters, whom he now adores.