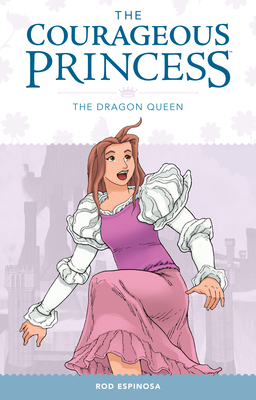 
Usually Ships in 1-5 Days
Princess Mabelrose has journeyed far and saved herself and others from danger and tyranny, but she has yet to make her way home.

In the conclusion to the Courageous Princess trilogy, Mabelrose must use her generous spirit, as well as her brains, to melt the heart of the Dragon Queen and gain her freedom. But she still has to bring her father and her friends back from the queen's unreachable Unremembered Lands . . .

Author Rod Espinosa proves once again that compassion and intelligence are more than a match for any danger!
Rod Espinosa is a comics creator, writer, and illustrator. In addition to his lengthy work Neotopia, for Antarctic Press, Espinosa has done extensive work adapting and illustrating literary classics into comics form, as well as creating comic book stories of important events from American history. Born in the Philippines, Espinosa graduated from the Don Bosco technical college with a certificate in architectural drafting and earned a degree in advertising art from Santo Tomas University in Manila. He worked for various companies in the fields of advertising, software entertainment, and film before finally settling into a life of a comic book author. Espinosa's work on The Courageous Princess at Antarctic Press in 2000 earned him Ignatz Awards nominations for Promising New Talent and Best Artist, and a 2002 Eisner Award nomination for Best Title for Younger Readers. The author lives in San Antonio, Texas.