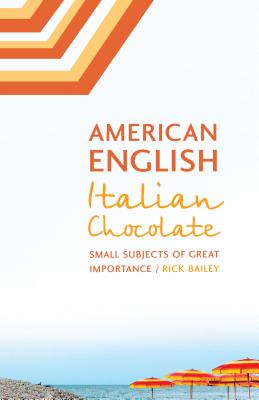 
On Our Shelves Now
American English, Italian Chocolate is a memoir in essays beginning in the American Midwest and ending in north central Italy. In sharply rendered vignettes, Rick Bailey reflects on donuts and ducks, horses and car crashes, outhouses and EKGs. He travels all night from Michigan to New Jersey to attend the funeral of a college friend. After a vertiginous climb, he staggers in clogs across the top of the Leaning Tower of Pisa. In a trattoria in the hills above the Adriatic, he ruminates on the history and glories of beans, from Pythagoras to Thoreau, from the Saginaw valley to the Province of Urbino.

Bailey is a bumbling extra in a college production of Richard III. He is a college professor losing touch with a female student whose life is threatened by her husband. He is a father tasting samples of his daughter’s wedding cake. He is a son witnessing his aging parents’ decline. He is the husband of an Italian immigrant who takes him places he never imagined visiting, let alone making his own. At times humorous, at times bittersweet, Bailey’s ultimate subject is growing and knowing, finding the surprise and the sublime in the ordinary detail of daily life.

Rick Bailey is a professor emeritus of English at Henry Ford College in Michigan. He is the author or editor of several books on writing, including The Creative Writer’s Craft.
"Delights and will make readers stop and notice the individual pieces of their everyday lives."—Publishers Weekly, starred review

“Rick Bailey’s writing sparkles with wit and self-deprecating humor, provoking laughter that hurts with the recognition of our own foibles and faults. His keen observations transcend the ‘small’ subjects of these short, powerful essays.”—Jim Daniels, author of Rowing Inland and Eight Mile High


“In Rick Bailey’s memoir, readers will find short essays filled with poetic language and the feel of a satisfying short story. In writing that is filled with quick humor and poignant tenderness, Bailey’s experiences reflect our own humanity back to us.”—M. L. Liebler, poet, editor, and author of I Want To Be Once


“A brain box of ruminations, the essayist has a penchant for connecting dots most gazers never see or sense or hear. A bracing, buoyant read!”—Thomas Lynch, coeditor of Artifacts and Illuminations: Critical Essays on Loren Eiseley