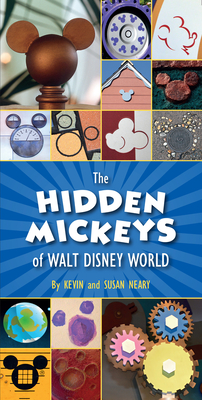 
Usually Ships in 1-5 Days
A scavenger hunt through Walt Disney World-with hundreds of photos!
So what exactly is a Hidden Mickey? Quite simply, it's an artistic representation of Mickey that was intentionally placed amid the architecture and design of the parks and resorts. Oftentimes it's the familiar three-circle shape of his ears and head. Other times it might be a profile of his face or a full-body silhouette. Walt Disney World Guests with keen eyes can tell you that Mickey pops up all over the resort, often in the most unexpected places.

With this resortwide scavenger hunt, you'll be guided toward each Hidden Mickey, first with a general hint-if you're up for a challenge-and then with a very specific clue. It's so much search-and-find fun, you might forget about your FastPass reservation for Big Thunder Mountain Railroad!

Planning a trip tothe Walt Disney World? Be sure to have all the official guides from DisneyEditions:

"
Kevin Neary has coauthored four Disney trivia books (1992?2000) with Dave Smith for The Walt Disney Company as well as two baseball books (Major League Dads: Baseball's Best Players Reflect on the Fathers Who Inspired Them to Love the Game, 2012, and Closer: Major League Players Reveal the Inside Pitch on Saving the Game, 2013) with Leigh A. Tobin for Running Press. Kevin has also written 715: Reflections of Hammerin' Hank & the Home Run that Made History (2015) for SkyhorsePublishing. His next baseball book will be The Manager: Rules of Engagement and will feature a collection of interviews and stories from fifty of the game's best managers over the past fifty years. Kevin's wife, Susan, joins him in this adventure of searching for Hidden Mickeys.