One Earth: People of Color Protecting Our Planet (Paperback) 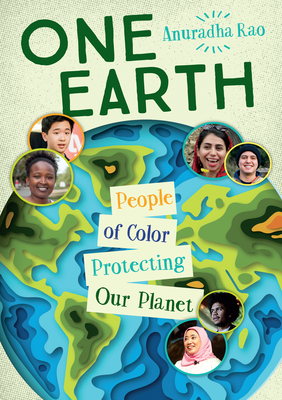 One Earth: People of Color Protecting Our Planet (Paperback)


Usually Ships in 1-5 Days
★ "The activists' stories are extraordinary...It's a powerful answer to Rao's framing questions: 'Who is an environmental defender? What does she or he look like? Maybe like you. Maybe like me.'"--Publishers Weekly, starred review ★ "Thought-provoking reading for young people figuring out their own contributions. This valuable compilation shows that Earth's salvation lies in the diversity of its people."--Kirkus Reviews, starred review One Earth profiles Black, Indigenous and People of Color who live and work as environmental defenders. Through their individual stories, the book shows that the intersection of environment and ethnicity is an asset to achieving environmental goals. The twenty short biographies introduce readers to diverse activists from all around the world, who are of many ages and ethnicities. From saving ancient trees on the West Coast of Canada, to protecting the Irrawaddy dolphins of India, to uncovering racial inequalities in the food system in the United States, these environmental heroes are celebrated by author and biologist Anuradha Rao, who outlines how they went from being kids who cared about the environment to community leaders in their field. One Earth is full of environmental role models waiting to be found.