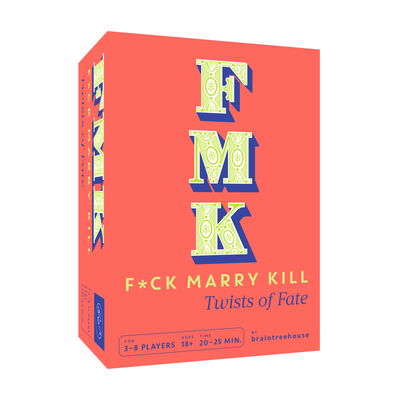 By JJ Harrison, Bill Galvan, Paul Boren
List Price: $19.95
Our Price: $9.98
(Save: $9.97 50%)
On Our Shelves Now
Darwin. Gandhi. Jeff Goldblum. If you had to f*ck one, marry another, and kill the last, what would you choose? But wait—what if Dracula could grant magic wishes? Would that change your mind? Making the choice is tough but hilarious in this spin on the classic party game that includes weird and sidesplitting twists! In a poppy and portable package, FMK includes 100 famous characters and 150 comical twists, perfect for up to 8 of your dirtiest friends.
Brain Treehouse is JJ Harrison, Paul Boren, and Bill Galvan.

JJ Harrison is an award-winning artist and designer known for his work on Adventure Time and Die Hard. His work is featured in some of the world's most popular art galleries and he enjoys the privilege of working with the top publishing companies in entertainment.

Paul Boren is a skilled game designer with degrees in computer science and economics. He has several years of experience creating games for education and is a former product designer for NBC Universal. And this one time his artwork was featured in Nintendo Power.

Bill Galvan has been a comic book artist for Archie Comics for over 11 years. He has worked on numerous iconic characters, including Bart Simpson and Radioactive Man for Simpsons Comics and The Sentry for Marvel. He is currently drawing the comic series relaunch of Underdog.