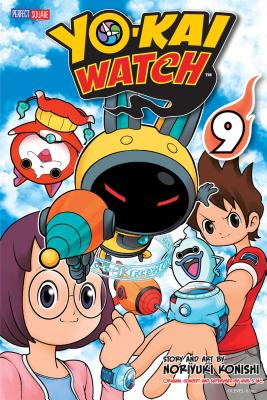 This is book number 9 in the Yo-kai Watch series.

Join Nate as he befriends the Yo-kai of the hit video game Yo-kai Watch!

Nate Adams was your regular, everyday kid, until he received the Yo-kai Watch, which allows him to see Yo-kai that are normally invisible to the naked eye!
Noriyuki Konishi hails from Shimabara City in Nagasaki Prefecture, Japan. He debuted with E-CUFF in Monthly Shonen Jump Original in 1997. He is known in Japan for writing manga adaptations of AM Driver and Mushiking: King of the Beetles, along with Saiyuki Hiro Go-Kū Den!, Chōhenshin Gag Gaiden!! Card Warrior Kamen Riders, Go-Go-Go Saiyuki: Shin Gokūden and more. Konishi was the recipient of the 38th Kodansha manga award in 2014 and the 60th Shogakukan manga award in 2015.