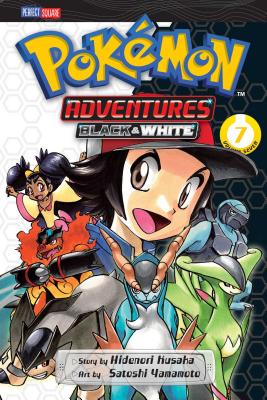 This is book number 7 in the Pokémon Adventures: Black and White series.

Black trains hard to prepare to rescue the Gym Leaders from Team Plasma's clutches. Then he tries to convince a group of embittered Pokémon to trust humans again, while Trainer Alder tries to convince Team Plasma's King N that the Pokémon League exemplifies the powerful bond between Pokémon and Trainer. now, will Black be able to enter the Pokémon League and fufill his dream? And if so...will he win?

Will Black fulfill his dream of winning the Pokémon League...?
Hidenori Kusaka is the writer for VIZ Media’s POKÉMON ADVENTURES. Running continuously for over twenty years now, POKÉMON ADVENTURES is the only manga series to completely cover all the Pokémon games and has become one of the most popular series of all time. Kusaka is currently working on the 12th and 13th story arcs, POKÉMON X・Y and POKÉMON ΩRUBY αSAPPHIRE. In addition to writing manga, he also edits children’s books and plans mixed-media projects for Shogakukan’s children’s magazines. He uses the Pokémon Electrode as his author portrait.