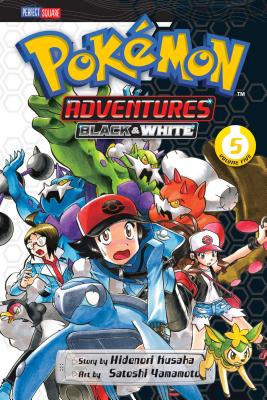 This is book number 5 in the Pokémon Adventures: Black and White series.

White tests out a Pokémon battleground prototype: the Battle Subway. Meanwhile, Black is happily reunited with an old friend...under unhappy circumstances. Then Gym Leader Clay reveals a dangerous secret. Now Black must prove himself to the other Unova Gym Leaders so he can join their team to fight a common enemy—an evil organization that might jeopardize the Pokémon League Championship itself! Will Black earn the trust of the Unova Gym Leaders in time...by ringing a bell?!
Hidenori Kusaka is the writer for VIZ Media’s POKÉMON ADVENTURES. Running continuously for over twenty years now, POKÉMON ADVENTURES is the only manga series to completely cover all the Pokémon games and has become one of the most popular series of all time. Kusaka is currently working on the 12th and 13th story arcs, POKÉMON X・Y and POKÉMON ΩRUBY αSAPPHIRE. In addition to writing manga, he also edits children’s books and plans mixed-media projects for Shogakukan’s children’s magazines. He uses the Pokémon Electrode as his author portrait.