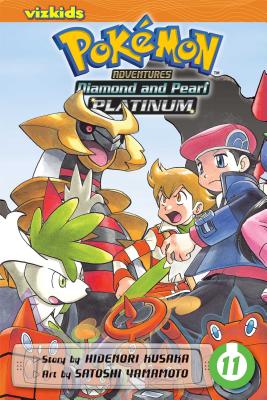 This is book number 11 in the Pokémon Adventures: Diamond and Pearl/Platinum series.

The battle rages back and forth between the Distortion World and the regular world! Then, when Legendary Pokémon Giratina attacks Pearl, Dia intervenes with disastrous consequences! Meanwhile, Lady finds an unexpected ally in an unexpected location.

Will peace ever be restored to the Sinnoh Region...?!

Plus, spend time with lots of Pokémon including Blissey, Giratina, Regigigas, Slowking, Rotom, Shaymin, Cresselia, Magmortar, Electivire, Alakazam, Tangrowth and Arcanine!
Hidenori Kusaka is the writer for VIZ Media’s Pokémon Adventures. Running continuously for over 20 years, Pokémon Adventures is the only manga series to completely cover all the Pokémon games and has become one of the most popular series of all time. Kusaka is currently working on the 14th story arc, Pokémon: Sun & Moon. In addition to writing manga, he also edits children’s books and plans mixed-media projects for Shogakukan’s children’s magazines. He uses the Pokémon Electrode as his author portrait.