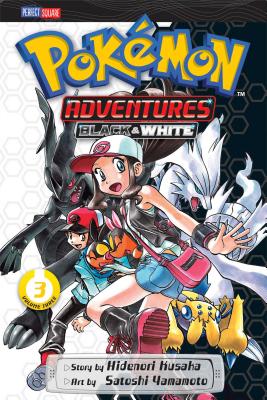 This is book number 3 in the Pokémon Adventures: Black and White series.

A precious fossil is stolen from the Nacrene Museum! Can Black track it down by…following its tracks? Then, mysterious Team Plasma is one step closer to bringing back a Legendary Pokémon. What are they up to? Probably no good!

Plus, will Gigi and Tep’s relationship survive…a major change?!
Hidenori Kusaka is the writer for VIZ Media’s POKÉMON ADVENTURES. Running continuously for over twenty years now, POKÉMON ADVENTURES is the only manga series to completely cover all the Pokémon games and has become one of the most popular series of all time. Kusaka is currently working on the 12th and 13th story arcs, POKÉMON X・Y and POKÉMON ΩRUBY αSAPPHIRE. In addition to writing manga, he also edits children’s books and plans mixed-media projects for Shogakukan’s children’s magazines. He uses the Pokémon Electrode as his author portrait.