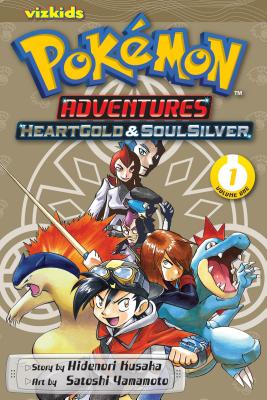 This is book number 1 in the Pokémon Adventures: HeartGold and SoulSilver series.

Your favorite Pokémon Trainers Gold and Silver are back! Crystal too! And so is Team Rocket... In this two-volume thriller, troublemaker Gold and feisty Silver must team up again to find their old enemy Lance and the Legendary Pokémon Arceus.

Meanwhile, Team Rocket is on the rampage digging up, stealing and collecting 16 mysterious plates for some nefarious purpose known only to them...

What is the hidden power of the 16 plates, and what do they symbolize...?
Hidenori Kusaka is the writer for VIZ Media’s Pokémon Adventures. Running continuously for over 20 years, Pokémon Adventures is the only manga series to completely cover all the Pokémon games and has become one of the most popular series of all time. Kusaka is currently working on the 14th story arc, Pokémon: Sun & Moon. In addition to writing manga, he also edits children’s books and plans mixed-media projects for Shogakukan’s children’s magazines. He uses the Pokémon Electrode as his author portrait.