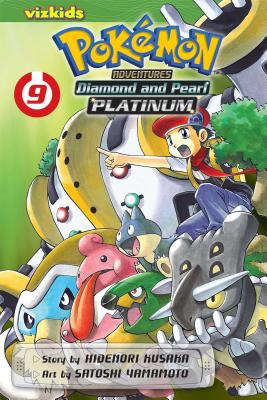 This is book number 9 in the Pokémon Adventures: Diamond and Pearl/Platinum series.

Finally together again, Dia, Pearl, and Platinum must battle Legendary Pokémon Dialga and Palkia, who are being controlled by Cyrus, the powerful boss of Team Galactic! Then a new Legendary Pokémon leaps into the fray! Whose side is it on...?

And who will rescue Platinum’s hapless bodyguards from the mysterious Distortion World they’ve been banished to...?

Plus, hang with Lopunny and meet Porygon-Z, Gallade, and... Looker?!
Hidenori Kusaka is the writer for VIZ Media’s Pokémon Adventures. Running continuously for over 20 years, Pokémon Adventures is the only manga series to completely cover all the Pokémon games and has become one of the most popular series of all time. Kusaka is currently working on the 14th story arc, Pokémon: Sun & Moon. In addition to writing manga, he also edits children’s books and plans mixed-media projects for Shogakukan’s children’s magazines. He uses the Pokémon Electrode as his author portrait.