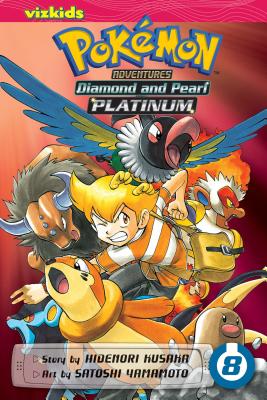 This is book number 8 in the Pokémon Adventures: Diamond and Pearl/Platinum series.

To prepare for their big battle, our trio of friends each need to reach out for help—from Gym Leaders to new Pokémon. Then Lady, Pearl and Diamond are finally reunited in the very heart of Team Galactic’s headquarters. Can they release the three Legendary Pokémon...before it’s too late?

And who will take on Team Galactic’s powerful leader Cyrus?!

Plus, meet Electivire, Honchkrow, Chingling, Spiritomb, Dialga and Palkia!
Hidenori Kusaka is the writer for VIZ Media’s Pokémon Adventures. Running continuously for over 20 years, Pokémon Adventures is the only manga series to completely cover all the Pokémon games and has become one of the most popular series of all time. Kusaka is currently working on the 14th story arc, Pokémon: Sun & Moon. In addition to writing manga, he also edits children’s books and plans mixed-media projects for Shogakukan’s children’s magazines. He uses the Pokémon Electrode as his author portrait.