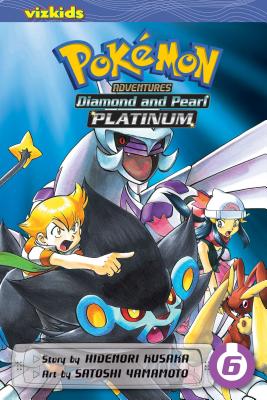 This is book number 6 in the Pokémon Adventures: Diamond and Pearl/Platinum series.

Platinum gets a new Pokémon, and an old Pokémon friend gets a Trainer! Then, our trio divides and conquers. While Platinum skis the slopes and pursues her Glacier Badge, Pearl investigates Team Galactic, and Diamond stumbles upon a luxurious mansion staffed by a stuffy butler. Where could Diamond be...?!

Meanwhile, what is Team Galactic member Mars doing with that mysterious flying camera...?

Hidenori Kusaka is the writer for VIZ Media’s Pokémon Adventures. Running continuously for over 20 years, Pokémon Adventures is the only manga series to completely cover all the Pokémon games and has become one of the most popular series of all time. Kusaka is currently working on the 14th story arc, Pokémon: Sun & Moon. In addition to writing manga, he also edits children’s books and plans mixed-media projects for Shogakukan’s children’s magazines. He uses the Pokémon Electrode as his author portrait.