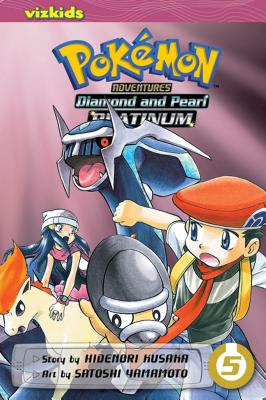 This is book number 5 in the Pokémon Adventures: Diamond and Pearl/Platinum series.

Lady feels betrayed when she finally discovers the truth about Diamond’s and Pearl’s identities. Is the trio’s journey—and friendship—over?! And how can our three heroes save three Legendary Lake Pokémon from Team Galactic…when each Legendary Pokemon is in a different lake?!

Meanwhile, what evil is Team Galactic secretly concocting in an abamdoned factory…?

Hidenori Kusaka is the writer for VIZ Media’s Pokémon Adventures. Running continuously for over 20 years, Pokémon Adventures is the only manga series to completely cover all the Pokémon games and has become one of the most popular series of all time. Kusaka is currently working on the 14th story arc, Pokémon: Sun & Moon. In addition to writing manga, he also edits children’s books and plans mixed-media projects for Shogakukan’s children’s magazines. He uses the Pokémon Electrode as his author portrait.