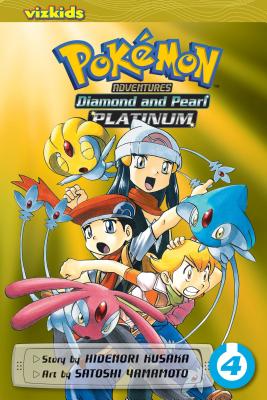 This is book number 4 in the Pokémon Adventures: Diamond and Pearl/Platinum series.

Mysteries abound when a Psyduck and a Pokémon Researcher go missing. And Lady fights two epic Gym battles! If only Pearl and Diamond could stop fighting each other...!

Then, what secret does Cyrus, leader of Team Galactic, seek in the ruins and relics of Celestic Town...?

Plus, meet Carnivine, Floatzel, Magnezone, Drifblim, Mismagius, Bronzong and many more Sinnoh Pokémon friends!
Hidenori Kusaka is the writer for VIZ Media’s Pokémon Adventures. Running continuously for over 20 years, Pokémon Adventures is the only manga series to completely cover all the Pokémon games and has become one of the most popular series of all time. Kusaka is currently working on the 14th story arc, Pokémon: Sun & Moon. In addition to writing manga, he also edits children’s books and plans mixed-media projects for Shogakukan’s children’s magazines. He uses the Pokémon Electrode as his author portrait.