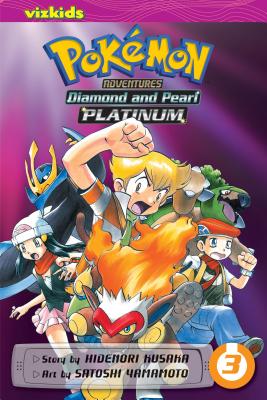 This is book number 3 in the Pokémon Adventures: Diamond and Pearl/Platinum series.

Thieves are afoot. One wants to steal Diamond’s Pokédex. Another wants to steal...Lady! Can Pearl and Diamond protect her...as well as an entire city?! Then join our trio as they follow in the footsteps of a scientist who researches Pokémon footprints.

Meanwhile, what is Team Galactic planning to do with that machine they just invented...?

Plus, meet Riolu, Skuntank, Gible, Hippopotas, Kricketune, Skorupi and many more Sinnoh Pokémon friends!
Hidenori Kusaka is the writer for VIZ Media’s Pokémon Adventures. Running continuously for over 20 years, Pokémon Adventures is the only manga series to completely cover all the Pokémon games and has become one of the most popular series of all time. Kusaka is currently working on the 14th story arc, Pokémon: Sun & Moon. In addition to writing manga, he also edits children’s books and plans mixed-media projects for Shogakukan’s children’s magazines. He uses the Pokémon Electrode as his author portrait.