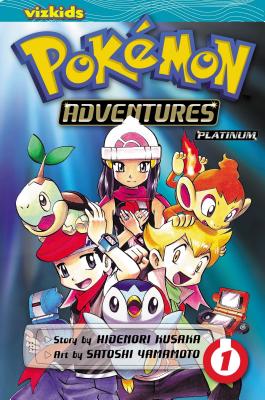 This is book number 1 in the Pokémon Adventures: Diamond and Pearl/Platinum series.

Pokémon Trainers Pearl and Diamond are starstruck! Their lifelong dream is to floor an audience with their Pokémon comedy act. So how do they wind up as bodyguards to a pampered little rich girl on a quest to reach the peak of Mt. Coronet...?!

Come along and join the thrills and laughs as Pokémon Adventures continues!

Plus, meet Starly, Bidoof, Luxio, Combee, Bronzor, Rotom and many more Sinnoh Pokémon friends!
Hidenori Kusaka is the writer for VIZ Media’s Pokémon Adventures. Running continuously for over 20 years, Pokémon Adventures is the only manga series to completely cover all the Pokémon games and has become one of the most popular series of all time. Kusaka is currently working on the 14th story arc, Pokémon: Sun & Moon. In addition to writing manga, he also edits children’s books and plans mixed-media projects for Shogakukan’s children’s magazines. He uses the Pokémon Electrode as his author portrait.