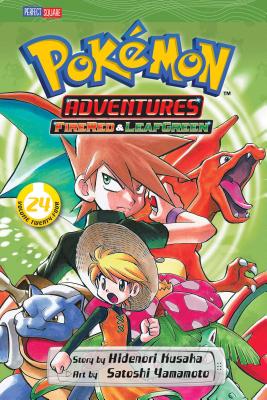 This is book number 24 in the Pokémon Adventures series.

Red is downhearted after being defeated by the Mythical Pokémon Deoxys and fears that Professor Oak has given up on him. With the support of Blue and Green and an unexpected powerful Pokémon ally, he continues on his journey. But then he must face a formidable human opponent—Giovanni! Meanwhile, what clues to his past will Silver find in Viridian City...?
Hidenori Kusaka is the writer for VIZ Media’s Pokémon Adventures. Running continuously for over 20 years, Pokémon Adventures is the only manga series to completely cover all the Pokémon games and has become one of the most popular series of all time. Kusaka is currently working on the 14th story arc, Pokémon: Sun & Moon. In addition to writing manga, he also edits children’s books and plans mixed-media projects for Shogakukan’s children’s magazines. He uses the Pokémon Electrode as his author portrait.