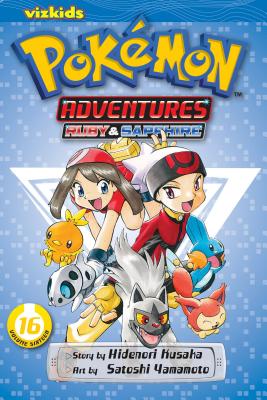 This is book number 16 in the Pokémon Adventures series.

Ruby and Sapphire go their separate ways to achieve their dreams in just eighty days! But their paths keep crossing... While Ruby seeks a beautiful new Pokémon in Dewford Town to help him win Pokémon Contests, he runs into Sapphire who is challenging the local Gym Leader to improve her Pokémon battle skills. Together, our intrepid Trainers attempt to deliver an important letter. What does it say, and who is the mysterious recipient...?

Plus, can Ruby and Sapphire prevent evil Team Magma from stealing a strange new technology?!
Hidenori Kusaka is the writer for VIZ Media’s Pokémon Adventures. Running continuously for over 20 years, Pokémon Adventures is the only manga series to completely cover all the Pokémon games and has become one of the most popular series of all time. Kusaka is currently working on the 14th story arc, Pokémon: Sun & Moon. In addition to writing manga, he also edits children’s books and plans mixed-media projects for Shogakukan’s children’s magazines. He uses the Pokémon Electrode as his author portrait.