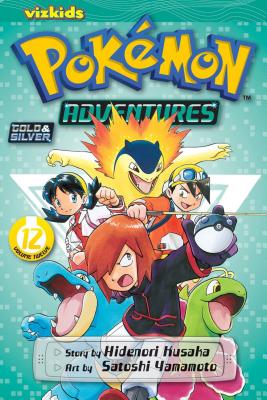 This is book number 12 in the Pokémon Adventures series.

The three Legendary Pokémon Suicune, Raikou, and Entei are each searching for a worthy Trainer. Will they be able to find someone powerful enough to fight by their side?

Meanwhile, Crystal and Yellow have teamed up to find a mysterious flying Pokémon. Watch out for that vortex! That's right, the same one that Gold and Silver fell into...
Hidenori Kusaka is the writer for VIZ Media’s Pokémon Adventures. Running continuously for over 20 years, Pokémon Adventures is the only manga series to completely cover all the Pokémon games and has become one of the most popular series of all time. Kusaka is currently working on the 14th story arc, Pokémon: Sun & Moon. In addition to writing manga, he also edits children’s books and plans mixed-media projects for Shogakukan’s children’s magazines. He uses the Pokémon Electrode as his author portrait.