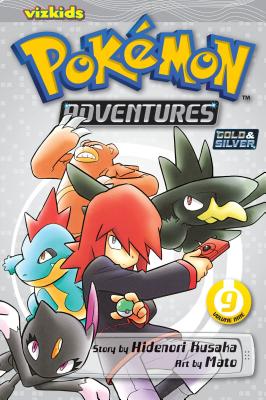 By Hidenori Kusaka, Mato (By (artist))

This is book number 9 in the Pokémon Adventures series.

The adventure, starring Gold and his rival Silver, continues! Gold is still trying to track down Silver when he uncovers a far bigger threat. Can these two Trainers put aside their differences to fight a common enemy?

Keep an eye on Team Rocket, Gold and Silver...Will they be the toughest opponents yet?
Hidenori Kusaka is the writer for VIZ Media’s Pokémon Adventures. Running continuously for over 20 years, Pokémon Adventures is the only manga series to completely cover all the Pokémon games and has become one of the most popular series of all time. Kusaka is currently working on the 14th story arc, Pokémon: Sun & Moon. In addition to writing manga, he also edits children’s books and plans mixed-media projects for Shogakukan’s children’s magazines. He uses the Pokémon Electrode as his author portrait.