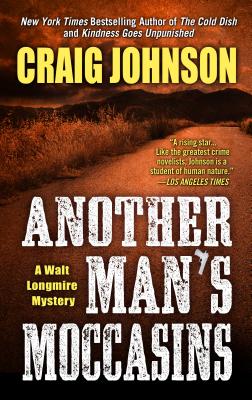 The fourth book in the bestselling Longmire Mystery series, the basis for the hit Netflix Original series LONGMIRE

Craig Johnson's The Highwayman and An Obvious Fact are now available from Viking. Fans of Ace Atkins, Nevada Barr, and Robert B. Parker will love the fourth mystery in New York Times bestselling author Craig Johnson's award-winning Longmire Mystery series, the basis for LONGMIRE, the hit drama series now streaming on Netflix. It delivers more of the taut prose, engrossing characters, beautiful Wyoming setting, and satisfying depth that reviewers have been hailing since his first book, The Cold Dish. In Another Man's Moccasins, the body of a Vietnamese woman dumped along the Wyoming interstate opens a baffling case for Sheriff Longmire, whose only suspect is a Crow Indian with a troubled past. But things get even stranger when a photograph turns up in the victim's purse that ties her murder to one from Longmire's past--a case he tackled as a Marine Corps investigator forty years earlier in Vietnam.
Craig Johnson is the New York Times bestselling author of the Longmire mysteries, the basis for the hit Netflix original series Longmire. He is the recipient of the Western Writers of America Spur Award for fiction, the Mountains and Plains Booksellers Award for fiction, the Nouvel Observateur Prix du Roman Noir, and the Prix SNCF du Polar. His novella Spirit of Steamboat was the first One Book Wyoming selection. He lives in Ucross, Wyoming, population twenty-five.