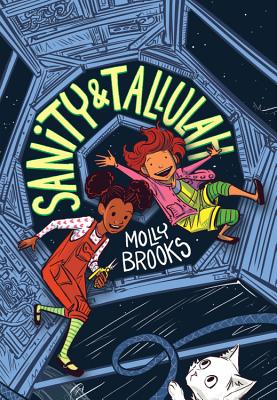 This is book number 1 in the Sanity & Tallulah series.

Best Friends. Mad Science.
It can get pretty dull living on a small, out-of-the-way station like Wilnick SS. Best Friends Sanity Jones and Tallulah Vega do their best to relieve the monotony of every day space life by finding adventures, solving mysteries, and taking turns getting each other into and out of trouble. But when Sanity's latest science project-an extremely-illegal-but-impossibly-cute three-headed kitten-escapes from the lab and starts causing havoc, the girls will have to turn the station upside down to find her-before the damage becomes irreversible!
Readers will be over the moon for this rollicking space adventure by debut author Molly Brooks.
Molly Brooks wrote and illustrated the Sanity & Tallulah series, and is the illustrator of Flying Machines: How the Wright Brothers Soared by Alison Wilgus, as well as many short comics. Her work has appeared in the Guardian, the Boston Globe, the Nashville Scene, BUST Magazine, ESPN social, Sports Illustrated online, and others. Molly lives and works in Brooklyn, where she spends her spare time watching vintage buddy-cop shows and documenting her cats.
"Debut author Brooks's inclusive vision of strong and diverse women engaged in science, variously abled bodies navigating the challenges of space, and positive family relationships is both enjoyable and commendable."—Publishers Weekly (starred review)

"Interlaced with spot-on dialogue that is full of humor, this page-turner delivers."—Kirkus Reviews (starred review)

"It's all invitingly envisioned with button-eyed characters in distinctive hairstyles and fashions inhabiting a convincingly down-to-earth space station and colored in a limited, muted palette that grounds this future and makes even more accessible."—Booklist

"Fans of fast-paced sci-fi graphic novels such as Zita the Spacegirl, as well as readers interested in humor, will be drawn to the plucky pair."—SLJ