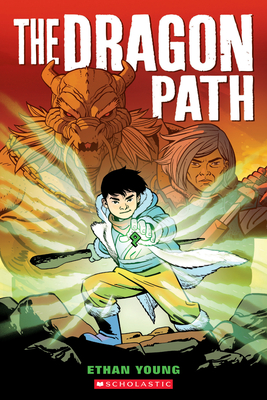 
On Our Shelves Now
In this action-adventure fantasy, young Prince Sing must overcome monstrous obstacles to help his clan return to their homeland.

The Wong Clan must leave their ruined homeland for a better life in the mythical Old Land, but to get there they must follow the dragon path, where their sworn enemies, the Dragon Tribe, rule. During a surprise attack, Prince Sing is separated from his clan. With the help of Ming, a powerful mystic from the Old Land, and Midnight, a monstrous warrior beast, Prince Sing must do all he can to save both his family and the Dragon Tribe from mutual destruction.

Ethan Young was born and raised in NYC to Chinese immigrant parents. Young is best known for NANJING: The Burning City, winner of the 2016 Reuben Award for Best Graphic Novel, which was also nominated for both the Eisner and Harvey awards. His other works include The Battles of Bridget Lee, Space Bear, and Life Between Panels. In addition to his comic book work, Young is also a prolific freelance illustrator, and worked as a character designer on the FXX animated TV show, Major Lazer.