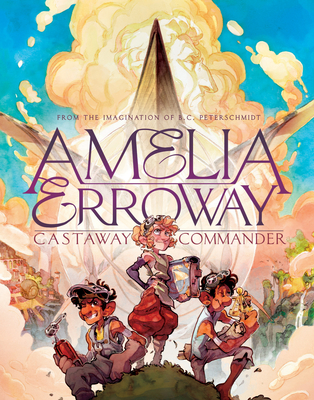 
Usually Ships in 1-5 Days
Being lost can sometimes be the first step toward finding your destiny.

Forbidden to become a pilot by her overprotective father, Amelia Erroway yearns to command her own airship. To prove her worth, she sets off alone on her father's prized craft. But disaster strikes: A fierce storm crashes her ship in uncharted lands and Amelia, now a castaway, must use her wits to survive. With the help of Rastor and Fynley, brothers who live deep in the Juniper rainforest, Amelia is determined to repair her airship and, with her newly formed crew, fly home.

B.C. Peterschmidt has dreamed her entire life of being a visual storyteller. She was born and raised in Minnesota and began her career as a freelance illustrator, later graduating from Pratt Institute. She has illustrated book covers for Diana Wynne Jones’s The Island of Chaldea and Naomi Shihab Nye’s The Turtle of Oman. Her work is published in Marvel’s New York Times bestselling anthology Out of the Past and also appears in Frank Beddor’s Hatter Madigan series. B. C. Peterschmidt now makes her home in California.