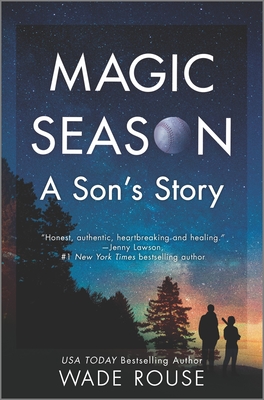 Don't miss our event with Wade on July 21 at 5:30pm at the Crooked Tree Theater! RSVP today by emailing us your name and the number of people in your party.
Wade Rouse only believes in three strikes when it comes to baseball, not family. With so much talk in today's culture of creating healthy boundaries, and cutting ties from "toxic" family members, it is a rare gift to find a soul with an almost super-human strength of forgiveness. Wade Rouse illustrates what true compassion and grace look like, and he gives hope to those who believe in the power of their convictions. Especially when that conviction is the belief that love can conquer all. While it is always tempting to paint the picture of our families with blurred the edges and sunny skies, this memoir is starkly beautiful in its honesty. Families who love baseball have a peculiar way of spending their Saturday afternoons getting "bleacher-butt," spitting sunflower seeds, and giving umpires the stink-eye while experiencing the wonder of being lost in the game. The sounds of the crack of the bat, the call of the ump., and the organ notes of "Take Me Out to the Ballgame" were the backdrop of my childhood, and it was something I could do with my dad. Readers will connect with Wade's complicated family, their love for the game, and the pain of adulthood.
A powerful message of forgiveness couched in the nostalgia of ballgames gone by.

Wade Rouse, bestselling author under the pen name Viola Shipman, finds solace with his dying father through their shared love of baseball in this poignant, illuminating memoir of family and forgiveness.

Before his success in public relations, his loving marriage and his storied writing career, Wade Rouse was simply Ted Rouse's son. A queer kid in a conservative Ozarks community, Wade struggled at a young age to garner his father's approval and find his voice. For his part, Ted was a hard-lined engineer, offering little emotional support or encouragement. But Wade and Ted had one thing in common: an undying love of the St. Louis Cardinals.

For decades, baseball offered Wade and his father a shared vocabulary--a way to stay in touch, to connect and to express their emotions. But when his father's health takes a turn for the worst, Wade returns to southwest Missouri to share one final season with his father. As the Cards race towards a dramatic pennant race, Wade and his father begin to open up in way they never thought possible. Together, inning by inning during their own magic season, they'll move towards forgiveness, reconciliation, and peace.

Heartfelt, hilarious and lovingly rendered, Magic Season is an unforgettable story of love, family and forgiveness against the backdrop of America's favorite pastime.