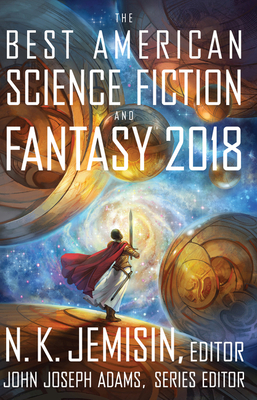 
Usually Ships in 1-5 Days
Today’s readers of science fiction and fantasy have an appetite for stories that address a wide variety of voices, perspectives, and styles. There is an openness to experiment and pushing boundaries, combined with the classic desire to read about space ships and dragons, future technology and ancient magic, and the places where they intersect. Contemporary science fiction and fantasy looks to accomplish the same goal as ever—to illuminate what it means to be human. With a diverse selection of stories chosen by series editor John Joseph Adams and guest editor N. K. Jemisin, The Best American Science Fiction and Fantasy 2018 explores the ever-expanding and changing world of SFF today, with Jemisin bringing her lyrical, endlessly curious point of view to the series’ latest edition.

JOHN JOSEPH ADAMS is the series editor of The Best American Science Fiction and Fantasy and is the editor of more than thirty anthologies, such as Wastelands, The Living Dead, and The Dystopia Triptych. He is also the editor the Hugo Award-winning Lightspeed, and is also publisher of Lightspeed as well as its sister-magazines Nightmare and Fantasy. For five years he was the editor of the John Joseph Adams Books novel imprint for Houghton Mifflin Harcourt.

"An almost unheard-of diversity of tales absolutely sing in this superlative anthology..." — Publishers Weekly, starred review     "If these annual best-of anthologies indicate where speculative fiction is heading, readers should be excited for the future of the genre...These are stories to take your breath away, to make you laugh, to bring you to despair, to give you hope, to creep you out, and even to break your heart...all are interesting, vibrant, and worthy." — Booklist, starred review     —