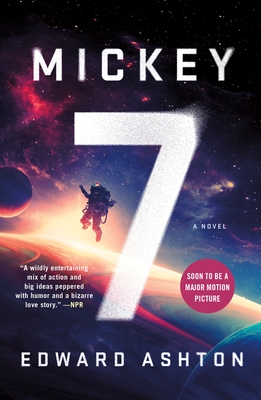 This is book number 1 in the Mickey7 series.

"A wildly entertaining mix of action and big ideas peppered with humor and a bizarre love story." —NPR

Soon to be a major motion picture.

Dying isn’t any fun…but at least it’s a living.

Mickey7 is an Expendable: a disposable employee on a human expedition sent to colonize the ice world Niflheim. Whenever there’s a mission that’s too dangerous—even suicidal—the crew turns to Mickey. After one iteration dies, a new body is regenerated with most of his memories intact.

On a routine scouting mission, Mickey7 goes missing and is presumed dead. By the time he returns to the colony base, his fate has been sealed. There’s a new clone, Mickey8, reporting for Expendable duties. The idea of duplicate Expendables is universally loathed, and if caught, they face being recycled into protein to feed a hungry colony. Meanwhile, life on Niflheim is getting worse, and the native species are growing curious about their new neighbors, which has Commander Marshall very afraid. Ultimately, the survival of both lifeforms will come down to Mickey7.

That is, if he can just keep from dying for good.

"The fun [in reading Mickey7] is trying to keep up with Mr. Ashton’s twists and turns, and the extra fun is that you never do." —The Wall Street Journal

"Sci-fi readers will be drawn in by the inventive premise and stick around for the plucky narrator." —Publishers Weekly

Edward Ashton (he/him) is the author of the novels Three Days in April, The End of Ordinary, and Mickey7, as well as of short stories which have appeared in venues ranging from the newsletter of an Italian sausage company to Escape Pod, Analog, and Fireside Fiction. He lives in upstate New York in a cabin in the woods (not that cabin in the woods) with his wife, a variable number of daughters, and an adorably mopey dog named Max. In his free time, he enjoys cancer research, teaching quantum physics to sullen graduate students, and whittling.