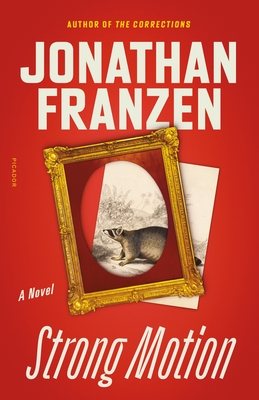 From the author of Crossroads and The Corrections

“Jonathan Franzen, an abundantly gifted writer, has even more nerve than talent” (The New York Times), and he refuses to play it safe in this bold, layered ecological thriller.

Louis Holland arrives in Boston in a spring of strange happenings—earthquakes strike the city, and the first one kills his grandmother. During a bitter feud over the inheritance, Louis falls in love with a young seismologist, Renée Seitchek, whose theory about the origin of the earthquakes turns his world upside down.

“No doubt about it: Jonathan Franzen . . . is one of the most extraordinary writers around.” —Newsweek

“Strong Motion seems for a while like a brilliant chaos. Bit by bit, the chaos settles . . . the brilliant things remain, and the connections among them begin to appear.” —Los Angeles Times

Jonathan Franzen is the author of five novels, including The Corrections, Freedom, and Crossroads, and five works of nonfiction, most recently Farther Away and The End of the End of the Earth, all published by Farrar, Straus and Giroux. He lives in Santa Cruz, California.

“Bold, layered . . . Mr. Franzen lavishes vigorous, expansive prose not only on the big moments of sexual and emotional upheaval, but also on various sideshows and subthemes . . . An affirmation of Franzen's fierce imagination and distinctive seriocomic voice . . . his will be a career to watch.” —Josh Rubins, The New York Times Book Review

“Ingenious . . . Strong Motion is more than a novel with a compelling plot and a genuine romance (complete with highly charged love scenes); Franzen also writes a fluid prose that registers the observations of his wickedly sharp eye.” —Douglas Seibold, The Chicago Tribune

“Complicated and absorbing with a fair mix of intrigue, social commentary and humor laced with a tinge of malice.” —Anne Gowen, The Washington Times

“Strong Motion is a roller coaster thriller . . . Franzen captures with unnerving exactness what it feels like to be young, disaffected and outside mainstream America. There is an uncannily perceptive emotional truth to this book, and it strikes with the flinty anger of an early-sixties protest song.” —Will Dana, Mirabella

“Franzen is one of the most extraordinary writers around . . . Strong Motion shows all the brilliance of The Twenty-Seventh City.” —Laura Shapiro, Newsweek

“Lyrical, dramatic and, above all, fearless . . . Reading Strong Motion, one is not in the hands of a writer as a fine jeweler or a simple storyteller. Rather, we're in the presence of a great American moralist in the tradition of Dreiser, Twain or Sinclair Lewis.” —Ephraim Paul, Philadelphia Inquirer

“With this work, Franzen confidently assumes a position as one of the brightest lights of American letters . . . Part thriller, part comedy of manners, Strong Motion is full of suspense.” —Alicia Metcalf Miller, Cleveland Plain Dealer

“Franzen's dark vision of an ailing society has the same power as Don DeLillo's, but less of the numbing pessimism.” —Details

“Base and startling as a right to the jaw . . . [Franzen] is a writer of almost frightening talent and promise.” —Margaria Fichtner, Miami Herald