Empire of the Vampire (Paperback) 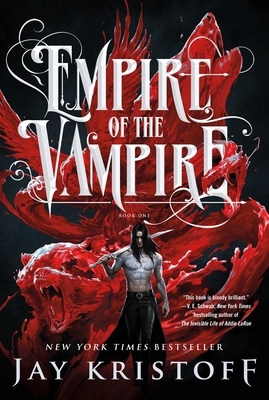 Empire of the Vampire (Paperback)

It has been twenty-seven long years since the last sunrise. For nearly three decades, vampires have waged war against humanity; building their eternal empire even as they tear down our own. Now, only a few tiny sparks of light endure in a sea of darkness.

Gabriel de León is a silversaint: a member of a holy brotherhood dedicated to defending realm and church from the creatures of the night. But even the Silver Order could not stem the tide once daylight failed us, and now, only Gabriel remains.

Imprisoned by the very monsters he vowed to destroy, the last silversaint is forced to tell his story. A story of legendary battles and forbidden love, of faith lost and friendships won, of the Wars of the Blood and the Forever King and the quest for humanity’s last remaining hope:

JAY KRISTOFF is a #1 international, New York Times and USA Today bestselling author of fantasy and science fiction, including Empire of the Vampire. He is the winner of eight Aurealis Awards, an ABIA, has over half a million books in print and is published in over thirty five countries, most of which he has never visited. He is as surprised about all of this as you are. He is 6’7 and has approximately 11,500 days to live.

He does not believe in happy endings.

BON ORTHWICK is a digital illustrator from Melbourne, Australia. Her work can be found in Sarah J. Maas’ A Court of Frost and Starlight; Leigh Bardugo’s Crooked Kingdom; and V.E. Schwab’s A Conjuring of Light. She is also the illustrator for the Empire of the Vampire series by Jay Kristoff. She's drawn to the Victorian Era, fantasy, and art deco, and loves stories that have a vintage feel. She's currently completing her BA in Animation from the Victorian College of the Arts in Melbourne, and is at work on her own YA novel set in Victorian London.

Praise for Empire of the Vampire:

“Brilliant and unputdownable, with tenderness and light bound into the bitterdark of a grim and fascinating world.” —Laini Taylor, New York Times bestselling author of Strange the Dreamer

“Jay Kristoff’s latest dark fantasy, Empire of the Vampire, is a gothic bloodbath that will leave any reader—including this one—breathless. The story is a vast apocalyptic canvas, reminiscent of Justin Cronin’s The Passage, even Stephen King’s The Stand, yet Kristoff’s work stands on its own ruthless merit as the opening gambit of a richer tale yet to unfold. I can’t wait to return again to this rich, lush, and bloody world. Until then, read this book now!” —James Rollins, #1 New York Times bestselling author of The Last Odyssey and The Starless Crown

"With Empire of the Vampire, Jay Kristoff has once again shown why he is a master storyteller. Gabriel de León is a complex and complicated new hero for Jay’s legion of fans, and soon-to-be fans… I absolutely cannot wait to share this book with my friends and fellow book lovers." —Sarah Danforth, Towne Book Center (Collegeville, PA)

"Empire of the Vampire is an epic marvel! …This is the best book that Jay Kristoff has written. He is a master storyteller …This is a story of vampires and heroes, of love and sorrow, of friendship and loss, of joy and devastation. It is a story of death and darkness, but if you look closely you will find a thread of hope that shines brighter than the sun." —Meghan Vanderlee, Schuler Books (Grand Rapids, MI)

"Simply put, Empire of the Vampire is an impressively built beast, bursting with supernatural lore and promise. With plenty of detail and twists to keep the reader intrigued, we’re predicting this to be a new favorite of the genre." —The Nerd Daily

“Empire of the Vampire is not for the faint of heart…. this is a book bursting with darkness of both the literal and the figurative variety….Empire of the Vampire is also genuinely compelling, a rich, layered story that embraces real stakes and wrestles with complex questions about faith, belief, and family, both found and otherwise.” —Den of Geek

“...the most I’ve enjoyed a fantasy novel for a long time...Empire of the Vampire is packed with many stand-out scenes, and knowing that this is only a portion of de Leon’s legendary tale, I’ll be picking up a copy of the sequel as soon as I can.” —Grimdark Magazine

"The twists and turns start early in this volume, and readers expecting wry humor and high body counts will not be disappointed....Kristoff's characters are fully formed and jump off the page. The world building, borrowing its structure from Italian political history, remains as intricate and fascinating as it was in Nevernight." —Booklist on Darkdawn

"Sexier, grittier, fiercer, bloodier — Jay Kristoff’s Godsgrave is an action-packed showstopper. ... Godsgrave thrums with unrelenting tension and suspense and you won’t know what to do with yourself once it’s over." —USA Today

"Come for the vengeful assassins, stay for the fear-drinking shadowcats. Godsgrave is a stylish, fast-paced and welcome return to the world of Nevernight." —Peter Newman, award-winning author of The Vagrant

"Assassins, magic, strange creatures are all pluses for me. But my favorite thing about this book is the voice...I adore well-done omniscient narrators with snark and a slight bit of disdain for either the reader or the main character." —Book Riot on Nevernight

"A sensuous, shades-of-moral-gray world; a compelling, passionate heroine; a high-stakes quest for revenge—this is a fantasy fans won't be able to put down." —Kirkus Reviews on Nevernight