The Art of the Con: The Most Notorious Fakes, Frauds, and Forgeries in the Art World (Paperback) 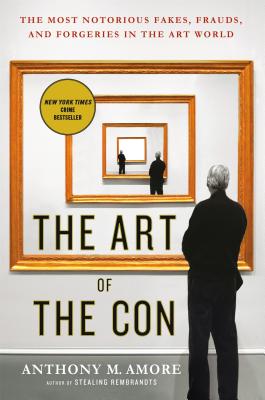 The Art of the Con: The Most Notorious Fakes, Frauds, and Forgeries in the Art World (Paperback)

Art scams are today so numerous that the specter of a lawsuit arising from a mistaken attribution has scared a number of experts away from the business of authentication and forgery, and with good reason. Art scams are increasingly convincing and involve incredible sums of money. The cons perpetrated by unscrupulous art dealers and their accomplices are proportionately elaborate.

Anthony M. Amore's The Art of the Con tells the stories of some of history's most notorious yet untold cons. They involve stolen art hidden for decades; elaborate ruses that involve the Nazis and allegedly plundered art; the theft of a conceptual prototype from a well-known artist by his assistant to be used later to create copies; the use of online and television auction sites to scam buyers out of millions; and other confidence scams incredible not only for their boldness but more so because they actually worked. Using interviews and newly released court documents, The Art of the Con will also take the reader into the investigations that led to the capture of the con men, who oftentimes return back to the world of crime. For some, it's an irresistible urge because their innocent dupes all share something in common: they want to believe.

Anthony M. Amore is the head of security at the Isabella Stewart Gardner Museum and contributes to the Boston Herald and The Huffington Post. He is the co-author of Stealing Rembrandts. He serves as trustee of the Association for Research into Crimes against Art and lectures widely on art crime.

“Amore is privy to more information on the subject of forgeries than the average art collector or dealer, and he shares a number of those stories in this engrossing account... a bracing and highly informative assessment of a very real problem, sure to resonate with art fans and curators alike.” —Publisher's Weekly

“The Art of the Con is must reading for any true-crime fan. Brazen museum thefts get all the headlines, but Anthony M. Amore makes it clear that the real money in art crime is to be made from forgeries, fakes, online auctions, laser printers and other 21st-century technologies. And Amore's diverse, colorful crew of art-gallery grifters and scammers have been reaping the kind of ill-gotten gains that old-school criminals could only dream of. Highly recommended!” —Howie Carr, New York Times bestselling author of THE BROTHERS BULGER and HITMAN

“What is most fascinating about The Art of the Con is that you haven't heard these stories before. The tales of these unknown scams are woven into a narrative that reads like a thriller. The attention to detail takes the reader inside the investigations and allows them to play armchair detective. Read this book!” —Jon Leiberman, radio and television host and author of WHITEY ON TRIAL: SECRETS, CORRUPTION, AND THE SEARCH FOR TRUTH

“It takes a lot to pull off an art world con. But it might take even more to tell the unvarnished story behind those swindles, and there's no doubt that Anthony Amore has done it in this definitive page-turner. The Art of the Con is wonderfully investigated-and highly paced-and provides a jaw-hitting-the-floor examination of art world fraud.” —Ulrich Boser, author of THE GARDNER HEIST: THE TRUE STORY OF THE WORLD'S LARGEST UNSOLVED ART THEFT

“Not only is The Art of the Con a wild ride through a rogue's gallery of colorful art forgers, entertainingly written by a master of prose. It is that. But it's also an object lesson in how art is made, what makes art valuable, and how some of the smartest minds in the business could be suckered by deals that ultimately proved just too good to be true.” —Michael Blanding, author of THE MAP THIEF: THE GRIPPING STORY OF AN ESTEEMED RARE-MAP DEALER WHO MADE MILLIONS STEALING PRICELESS MAPS