Eight Simple Rules for Dating a Dragon: A Novel of the Embraced (Mass Market) 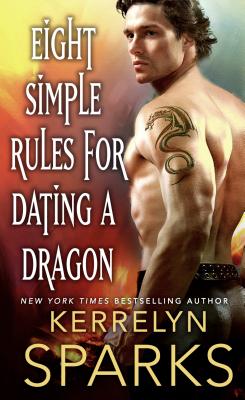 Eight Simple Rules for Dating a Dragon: A Novel of the Embraced (Mass Market)

This is book number 3 in the The Embraced series.

Gwennore is an Elf able to track down the cause of a certain illness and heal it—a valuable asset to her people. But when she is thrust into the realm of the dragons, she discovers a haunted place of power, passion, and magic—one that is plagued by an ancient curse. When she meets the smoldering General Silas Dravenko, Gwen knows she’s entered a whole new world of trouble. She’s been raised never to trust a dragon. So why does making a deal with the devil feel so good?

Silas has no way of saving the royal family he’s served for years. But when a beautiful, innocent elf comes bursting into his world, Silas is awakened to desire in a way he’s never felt before. But how can he trust a sworn enemy. . .and how can he live without her, in Eight Simple Rules for Dating a Dragon by New York Times bestselling author Kerrelyn Sparks.

Kerrelyn Sparks apparently has issues with reality. After writing more than a dozen books about vampires, she has now completely gone off the deep end and wound up on another planet. But how thrilling that she can share this magical new world with her readers! Although she is best known (so far) for the Love at Stake series, which has hit as high as number 5 on the New York Times list and 22 on the USA Today list, she hopes her readers will love The Embraced as much as they did her merry band of vamps and shifters. To learn more about her paranormal, historical, and new out-of- this-world fantasy romances, please visit Kerrelyn on Facebook, Twitter, or her website.

"The Embraced series will not let you down!" - RT Book Reviews

"Mixing paranormal romance with humor, Sparks clearly has a style all her own, one that readers love." — USA Today's Happily Ever After blog