Who's Your Caddy?: Looping for the Great, Near Great, and Reprobates of Golf (Paperback) 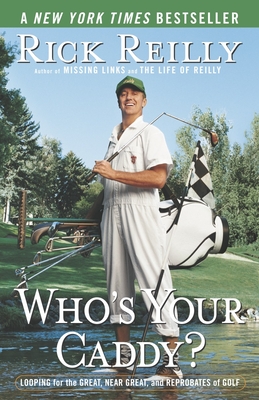 Who's Your Caddy?: Looping for the Great, Near Great, and Reprobates of Golf (Paperback)


On Our Shelves Now
The funniest and most popular sportswriter in America abandons his desk to caddy for some of the world’s most famous golfers—and some celebrity duffers—with hilarious results in this New York Times bestseller.

Who knows a golfer best? Who’s with them every minute of every round, hears their muttering, knows whether they cheat? Their caddies, of course. So sportswriter Rick Reilly figured that he could learn a lot about the players and their game by caddying, even though he had absolutely no idea how to do it. Amazingly, some of the best golfers in the world—including Jack Nicklaus, David Duval, Tom Lehman, John Daly, Jill McGill of the LPGA tour, and Casey Martin—agreed to let Reilly carry their bags at actual PGA and LPGA Tour events. To round out his portrait of the golfing life, Reilly also persuaded Deepak Chopra and Donald Trump to take him on as a caddy, accompanied the four highest-rolling golf hustlers in Las Vegas around the course, and carried the bag for a blind golfer.

Between his hilarious descriptions of his own ineptitude as a caddy and his insight into what makes the greats of golf so great, Reilly’s wicked wit and an expert’s eye provide readers with the next best thing to a great round of golf.
Rick Reilly has been voted National Sportswriter of the Year eleven times. Formerly a writer for Sports Illustrated and ESPN.com, he continues to deliver his opinion essays and features on ESPN SportsCenter. He is also the author of eleven books, several of which have been New York Times bestsellers.  His Sports From Hell, My Search for the World’s Dumbest Competition was a finalist for the Thurber Prize. Reilly lives in Denver, Colorado.

“Reilly could write about lawn bowling and make it funny, informative, and entertaining. You never know what the next page is going to bring.” —Los Angeles Times

“You might not think the story of a man carrying Tommy Aaron’s golf bag for 18 holes could make you laugh out loud, but you’d be wrong. Who’s Your Caddy? is funny enough to coax a chuckle out of Vijay Singh. A great way to read about the game—and its people, too.” —Charlotte Observer

“Goes down faster than a cool Bud on a 100-degree day.” —Fort Worth Star-Telegram