Our Syria: Recipes from Home (Hardcover) 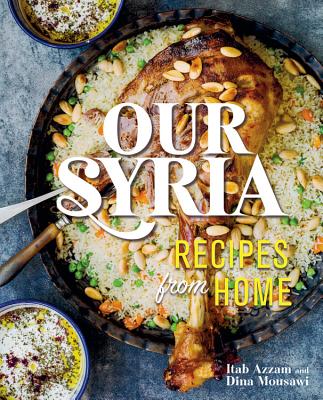 Our Syria: Recipes from Home (Hardcover)


Special Order
Syria is where food, memory, and resilience collide: recreate the flavors of this beautiful country in Our Syria, for delicious meals anywhere in the world.

Syria has always been the meeting point for the most delicious flavors from East and West, where spices and sweetness collide. Even now, in possibly the country's darkest hour, Syrian families in tiny apartments from Beirut to Berlin are searching out the best tomatoes, lemons, pomegranates, and parsley to evoke the memory of home, keeping their treasured food history alive across continents.

Friends and passionate cooks Itab and Dina met Syrian women in the Middle East and Europe to collect together the very best recipes from one of the world's greatest food cultures. They spent months cooking with them, learning their recipes and listening to stories of home. Recipes like the following elicit vibrant images of an ancient culture:

Our Syria is a delicious celebration of the unique taste, culture, and food of Syria-and a celebration of everything that food and memory can mean to an individual, to a family, and to a nation.
Itab Azzam was born in Sweida, Syria, and moved to the UK in 2011. An award-winning filmmaker and theatre producer, she was part of the team behind BBC Four's Syrian School and one of the producers of the Peabody and BAFTA-winning documentary series Exodus: Our Journey to Europe. She produced independent films including Queens of Syria and theatrical productions with refugees including Antigone of Syria. She lives in London.

Dina Mousawi began a career in the arts at the age of ten. Her extensive work in theatre has taken her on national and international tours across Europe, America, and the Middle East. After working on Antigone of Syria in 2014, Dina went on to produce and direct Terrestrial Journeys, a theatre piece devised with Syrian women living in Beirut's refugee camps. She now works at Complicite theatre company, and lives in London.
"Like most Syrian dishes, the recipes in Our Syria are flavorful, scrumptious and healthy. You will tremendously enjoy making and eating these dishes if you like international and healthy food. If this is your first time eating Syrian dishes, you will become addicted to them."—- The Washington Book Review

"Our Syria is laced with glorious food to nourish the body and bittersweet memories to salve the soul. The ancient splendors of Syrian culture may have been decimated, but thanks to these two culinary documentarians, its foodways are being preserved."—- myAJC (blog)