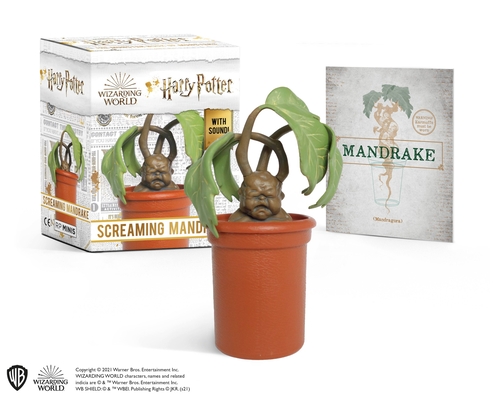 
On Our Shelves Now
An officially licensed collectible replica of the unforgettable mandrake root from Hogwarts School of Witchcraft and Wizardry's herbology class. Complete with sound of the plant's cry, this is a perfect gift for fans of the Wizarding World.

Donald Lemke has penned more than 100 books featuring some of today's most popular characters, including Batman, Superman, Scooby-Doo, Harry Potter, and more. He lives in St. Paul, Minnesota.
About Wizarding World
More than two decades ago, a young Harry Potter was whisked onto Platform 9¾ at King's Cross Station, and readers everywhere were swept along with him into a magical universe, created by J.K. Rowling. In the years since, the seven Harry Potter bestsellers have inspired eight blockbuster movies, an award-winning stage play, and, more recently, the start of the Fantastic Beasts five-film series. People of all ages have been enthralled by these extraordinary adventures, set within an expanding universe, inspired by the vision of J.K. Rowling.
For today's growing worldwide fan community, and for generations to come, the Wizarding World welcomes everyone to explore more of this magical universe - past, present and future. The Wizarding World also provides fans with an instant, trusted kite-mark of quality and authenticity.