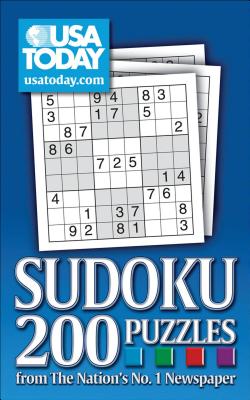 This is book number 1 in the USA Today Puzzles series.

'You can learn [Sudoku] in 10 seconds, and yet the logic needed to solve [the puzzle] is challenging. It's a perfect amount of time to spend on a puzzle, anywhere from five minutes to half an hour. And there's usually a rush at the very end, filling in the last squares, which gives you a great feeling. You immediately want to do another.

Millions of Americans aged eight through 88 are hooked on Sudoku. It is a game of reason and logic. As evidenced by the increasing hordes of fans, it is not only challenging, but addictive as well. According to a recent Newsweek article, Sudoku is the biggest puzzle craze to hit America since the Rubik's Cube in the 1980s. No adding or subtracting, no twists, no surprises: To solve Sudokus a puzzler just needs logic. Once you've completed one USA Today Sudoku puzzle, you won't be able to stop playing them.

A typical Sudoku puzzle can be completed in 10 to 30 minutes, depending on a player's ability and the puzzle's level of difficulty. The game is based solely on numbers, but requires no math skills whatsoever. Similar to a crossword puzzle, Sudoku is a series of nine 3 x 3 grids using each digit from 1 to 9 only once.

USA Today Sudoku contains 200 puzzles categorized into five skill levels. Answers are provided in the back of the book.
Since its founding in 1982, USA TODAY has reflected the pulse of the nation with original, on the ground reporting centered on diverse perspectives. USA TODAY is owned by Gannett Co., Inc. (NYSE: GCI).