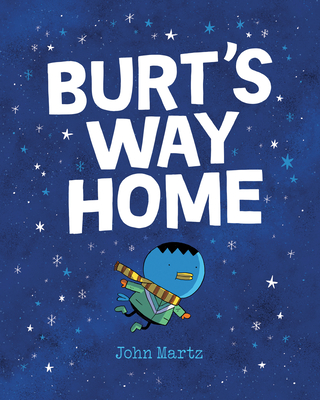 
Coming Soon - Available for Pre-Order Now
A cosmic accident has left Burt stranded on Earth . . . or so he says. An early graphic novel of foster care and the meaning of home, for fans of Binky the Space Cat.


Burt is an alien from a distant galaxy with advanced technology, but an accident has made his parents disappear and trapped him on Earth. And no matter what he does, he can't seem to get lowly Earth technology to work well enough to get him home.

That's his story, anyway. From the perspective of his foster mother, Lydia, Burt is a confused and lonely little boy who's difficult to understand and lives in his own world. But she's less focused on understanding him than she is on taking care of and supporting him.

Burt struggles to adjust to his new home, and Lydia tries her best. But when Burt embarks on a plan to teleport home once and for all and ventures into the cold all alone, Lydia will have to find a way to bridge the gulf between them.
JOHN MARTZ is an illustrator, cartoonist and designer. He is the author and illustrator of A Cat Named Tim, Evie and the Truth about Witches and Destination X, and the illustrator of How to Give Your Cat a Bath, Dear Flyary, Do Frogs Drink Hot Chocolate? and Who's On First?. His work has also appeared in MAD Magazine and The Nib. John is the art director for Penguin Random House Canada Young Readers, and he lives in Toronto.