Feel Your Way Through: A Book of Poetry (Hardcover) 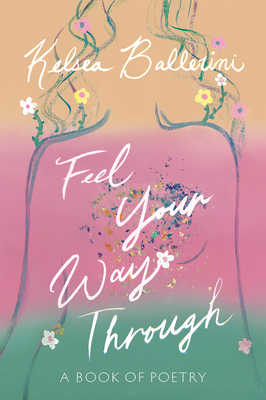 Feel Your Way Through: A Book of Poetry (Hardcover)


On Our Shelves Now
NATIONAL BESTSELLER • The personal and poignant debut poetry collection from the award-winning singer, songwriter, and producer revolves around the emotions, struggles, and experiences of finding your voice and confidence as a woman.

Deeply emotional and candid, Feel Your Way Through explores the challenges and celebrates the experiences faced by Kelsea Ballerini as she navigates the twists and turns of growing into a woman today. In this book of original poetry, Ballerini addresses themes of family, relationships, body image, self-love, sexuality, and the lessons of youth. Her poems speak to the often harsh, and sometimes beautiful, onset of womanhood. Honest, humble, and ultimately hopeful, this collection reveals a new dimension of Ballerini’s artistry and talent.
Kelsea Ballerini is an award-winning singer, songwriter, and producer. She made history as the only female country artist to log three consecutive number one singles from a debut album. Ballerini has garnered two Grammy Award nominations, won two ACM Awards, and picked up the iHeartRadio Music Awards honor for “Best New Country Artist” in addition to other accolades. Thus far, she has achieved thirteen gold, platinum, and multiplatinum RIAA single and album certifications, six career number one singles at country radio, and global streams totaling more than three billion to date.