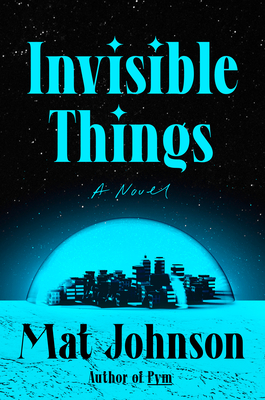 I have often wondered what novel Kurt Vonnegut would make of the times in which we are living. Maybe he could make sense of it for me? Since he can't sort things out, Mat Johnson's Invisible Things is the next best thing.
Hundreds of people have been abducted by a mysterious force and transported to a perfect American city on the surface of Jupiter’s moon Europa. The creation of this oasis is a mystery. The origin of the supplies and means of replenishment are a mystery. The duration of their stay is a mystery. And that very well-known, invisible mystery shall not be named. Not in public, and not in private. To upset the status quo might make you the focus of... well... an invisible thing. What does humanity do in the face of such uncertainty? We form political parties and begin attacking each other relentlessly.
Mat Johnson has created a guilty treat with his perfectly-timed satire. Each character begins with good intentions but ultimately succumbs to squabbling over petty differences. Their overblown egos and trivial motivations are painfully believable and provide ample comic relief. I just wish that there was a larger series coming as I’d happily be taken away to a place slightly more absurd than our current reality again.
— Matt
A sharp allegorical novel about a hidden human civilization, a crucial election, and a mysterious invisible force that must not be named, by one of our most imaginative comic novelists

ONE OF THE BEST BOOKS OF THE YEAR: The Washington Post

When sociologist Nalini Jackson joins the SS Delany for the first manned mission to Jupiter, all she wants is a career opportunity: the chance to conduct the first field study of group dynamics on long-haul cryoships. But what she discovers instead is an entire city encased in a bubble on Europa, Jupiter’s largest moon.

Even more unexpected, Nalini and the rest of the crew soon find themselves abducted and joining its captive population, forced to start new lives in a place called New Roanoke.

New Roanoke is a city riven by wealth inequality and governed by a feckless, predatory elite, its economy run on heedless consumption and income inequality. But in other ways it’s different from the cities we already know: it’s covered by an enormous dome, it’s populated by alien abductees, and it happens to be terrorized by an invisible entity so disturbing that no one even dares acknowledge its existence.

Albuquerque chauffer Chase Eubanks is pretty darn sure aliens stole his wife. People mock him for saying that, but he doesn’t care who knows it. So when his philanthropist boss funds a top-secret rescue mission to save New Roanoke’s abductees, Chase jumps at the chance to find her. The plan: Get the astronauts out and provide the population with the tech they need to escape this alien world. The reality: Nothing is ever simple when dealing with the complex, contradictory, and contrarian impulses of everyday earthlings.

This is a madcap, surreal adventure into a Jovian mirror world, one grappling with the same polarized politics, existential crises, and mass denialism that obsess and divide our own. Will New Roanoke survive? Will we?
Mat Johnson is a Philip H. Knight Chair of the Humanities at the University of Oregon. His publications include the novels Loving Day and Pym, the nonfiction novella The Great Negro Plot, and the graphic novel Incognegro. Johnson is the recipient of the American Book Award, the United States Artists James Baldwin Fellowship, The Hurston/Wright Legacy Award, and the John Dos Passos Prize for Literature.

“Invisible Things is a science fiction novel with an eye on the now. Mat Johnson’s latest book delivers a biting satire of American politics and class issues—from the vantage point of outer space. . . . Characters or events in his book call to mind Kurt Vonnegut’s The Sirens of Titan and Cat’s Cradle; Ray Bradbury’s The Martian Chronicles, especially the story ‘Mars Is Heaven!’; Robert A. Heinlein’s Stranger in a Strange Land . . . various Twilight Zone episodes; and even the B-movie classic Forbidden Planet, especially notable for its invisible ‘Monsters from the Id.’ . . . [It’s] tempting to employ the language of literary theory and dub Invisible Things an affectionate, intertextual construct, one that draws on half the tropes of modern sf. Still, awareness of echoes and borrowings merely enriches an already exciting story.”—The Washington Post

“In the sense of being an intergalactic adventure, it’s a wild departure for the author. But it’s also of a piece with work that’s become instantly recognizable for its blend of satiric wit, heavy underlying themes (including his own mixed-race origins) and a stubborn undercurrent of optimism. You just know a Mat Johnson novel when you read one. . . . Taking off from its wild setup, the novel delivers belly laughs and gut punches in quick succession. . . . Even if American society is turning dystopian fiction into a sucker’s game, Invisible Things feels au courant.”—Los Angeles Times

“In this biting comic allegory, Johnson (Pym) uses a space mission gone awry to expose our preference for embracing mass denial over grappling with distressing truths. . . . Johnson’s showstopping finale reminds us how much we can accomplish if we dare to face reality.”—Star Tribune

“This refreshing, stand-alone sci-fi novel is both surprisingly funny and insightful in its exploration of group dynamics.”—BuzzFeed

“The funny novel that doesn’t evaporate as you turn the page is hard to pull off. So much so that I read Invisible Things waiting for a crash that never came. . . . Mat Johnson, whose great novel Pym took on Poe, is that good.”—Chicago Tribune

“Relentlessly cynical and sarcastic, Mat Johnson’s Invisible Things offers sociopolitical commentary wrapped in the trappings of a classic space adventure. . . . The intriguing mystery combined with Johnson’s irreverent sense of humor makes it easy for the reader to engage with the satirical elements—a refreshing trait given that social commentary in modern sci-fi is often either watered down, thrown in by default or both. Invisible Things is a wonderful sci-fi ride full of lovable characters that dissects modern American capitalism with a barbed, sardonic wit.”—BookPage (starred review)