But Like Maybe Don't?: What Not to Do When Dating: An Illustrated Guide (Hardcover) 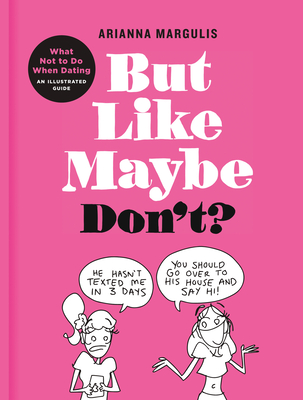 But Like Maybe Don't?: What Not to Do When Dating: An Illustrated Guide (Hardcover)


Usually Ships in 1-5 Days
The creator of the Instagram sensation But Like Maybe takes us on an illustrated journey through her worst dating mistakes—a hilarious, hopeful guide to what you need to get wrong in love before you get it right.

Arianna Margulis’s pen was set aflame when a boyfriend took her for a walk in Central Park. She was sneak-attack dumped because she “interfered with his meditation schedule.” After a few sobs, she found her way to a Sharpie, doodled the hilarity and the heartbreak, and But Like Maybe was born. As her cartoons became an Instagram cult hit, Arianna chronicled her misadventures through modern love via a crop-topped doppelganger, equal parts optimistic and anxious, who holds tight to the belief that bae is out there.

Now, with 70 never-before-seen toons, her first book is a witty and winning primer on what not to do when dating. Inspired by all the ways Arianna’s gone wrong in her search for love, from planning matching outfits with her high school boyfriend without his knowledge to deplaning an aircraft because her crush texted, this charming and off-kilter anti-guide gently leads you to what matters: realizing that you’re already pretty awesome.

With plenty of advice for recognizing and moving on when he’s just not that into you, Arianna shows how to not let a read receipt ruin your night, what to do when the slow fade commences, and how to flip the busy script on a guy. Dating can make the best of us a bit crazy. Keep this guide by your side so that the next time tequila urges you to text your ex, you can instead tell yourself . . . but like maybe don’t.
Arianna Margulis is currently navigating New York by way of small-town Michigan. As a relationship-obsessed fashion girl, she began doodling about her day-to-day dramas on the floor of her studio apartment and decided to expose her innermost feelings to the world. Thus But Like Maybe, the girl cult Instagram, was born. From painting street-sized murals and major brand collabs to enacting revenge on ex boyfriends, her imaginary best friend has created a world of opportunity she never thought possible. But most important of all, her drawings have brought her self-confidence, motivation, and love. Armed with a sharpie and fueled by margaritas, she’s ready to take on the world.

“Margulis is like a Carrie Bradshaw for the Instagram age. While the iconic HBO series tackled issues that were groundbreaking in the late 1990s and early 2000s, much of But Like Maybe [Instagram] revolves around a quintessentially 2020 problem: What happens when you’re dating someone but not, like, actually dating anyone? . . . Optimism is a lot easier when you realize you’re not alone in your dating woes. These cartoons will do just that.”—Elite Daily

“Now that you have a book deal, can I get my sweatshirt back?”—Alex, ex-“boyfriend”

“But Like Maybe Don’t? is an illustrated journey through Arianna’s biggest dating mistakes, but it’s also a hopeful guide to what you need to get wrong in love before you get it right. And it’s good.”—Swipe Life

“Instagram cartoonist Margulis goes analog with a laugh-out-loud-funny, illustrated guide to the don’ts of dating. She suffered so you won’t have to.”—Newsweek