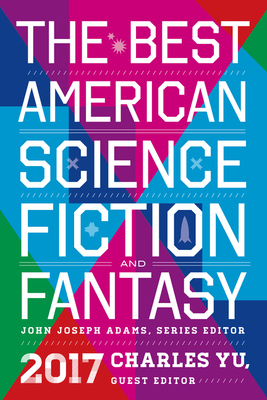 
Usually Ships in 1-5 Days
“This volume showcases the nuanced, playful, ever-expanding definitions of the genre and celebrates its current renaissance.” —Washington Post

Science fiction and fantasy can encompass so much, from far-future deep-space sagas to quiet contemporary tales to unreal kingdoms and beasts. But what the best of these stories do is the same across the genres—they illuminate the whole gamut of the human experience, interrogating our hopes and our fears. With a diverse selection of stories chosen by series editor John Joseph Adams and guest editor Charles Yu, The Best American Science Fiction and Fantasy 2017 continues to explore the ever-expanding and changing world of SFF today, with Yu bringing his unique view—literary, meta, and adventurous—to the series’ third edition.
JOHN JOSEPH ADAMS is the series editor of The Best American Science Fiction and Fantasy and is the editor of more than thirty anthologies, such as Wastelands, The Living Dead, and The Dystopia Triptych. He is also the editor the Hugo Award-winning Lightspeed, and is also publisher of Lightspeed as well as its sister-magazines Nightmare and Fantasy. For five years he was the editor of the John Joseph Adams Books novel imprint for Houghton Mifflin Harcourt.