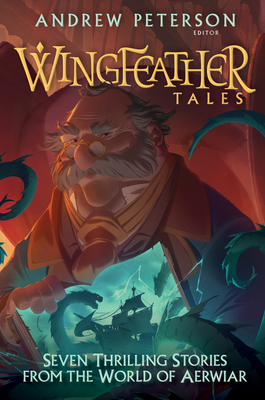 
Usually Ships in 1-5 Days
In hardcover at last, featuring new illustrations and the first-ever Wingfeather comic, now in print for the first time! Return to the world of the Wingfeather Saga with Andrew Peterson and his all-star author friends.

Immerse yourself in a land of bomnubbles and quarreling cousins, sea dragons and book publishers, thieves and Fangs and secret maps. Here within these pages lie seven stories of the distant past, lost adventures, forgotten songs, and heartbreaking histories. The Shining Isle is restored, but Aerwiar is vast—and these authors have tales yet to tell:

•  Explore the inner walls of Yorsha Doon, just West of the Woes of Shreve, on the edge of the Dark Sea of Darkness, from the eyes of young Safiki in “The Prince of Yorsha Doon” from the creator of Aewiar, Andrew Peterson.
•  Jennifer Trafton's warm and whimsical writing brings to life a publishing nightmare populated by the many beasts of Skree in “The Wooing of Sophelia Stupe.”
•  Learn the origins of Ollister Pebmrick's mysterious entry in the Creaturepedia about his encounter with a raggant in “Willow Worlds” by N. D. Wilson.
•  Travel with young Podo Helmer on an epic hunt for sea dragons in “From the Deeps of the Dragon King” from A. S. Peterson.
•  Jonathan Rogers presents “The Ballard of Lanric and Rube,” sung by Armulyn the Bard, tale-spinner of the imaginary Shining Isle of Anniera, in On the Edge of the Dark Sea of Darkness.
•  Discover what life was like for Maraly and Gammon in post-war Skree in “Shadowblade and the Florid Sword"—the first-ever Wingfeather comic—by Andrew Peterson.
•  Douglas McKelvey's epic, heartbreakingly hopeful novella "The Places Beyond the Maps” recounts a father's journey to redemption.

Enter a rich, imaginative world that becomes more real, more mysterious, more dangerous, and more beautiful with each story's telling.
Andrew Peterson is critically acclaimed in the music industry, and his lyrics and songwriting are compared by reviewers to James Taylor, Marc Cohn, and the late Rich Mullins. He's married to Jamie; they have two sons, Aedan and Jesse, and one daughter, Skye.