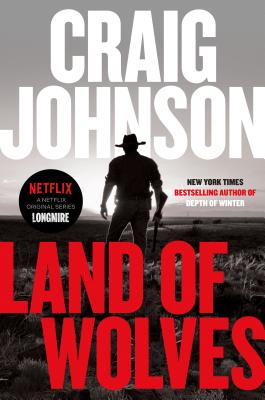 This is book number 15 in the A Longmire Mystery series.

"It's the scenery—and the big guy standing in front of the scenery—that keeps us coming back to Craig Johnson's lean and leathery mysteries."
—The New York Times Book Review


Recovering from his harrowing experiences in Mexico, Sheriff Walt Longmire returns to Absaroka County, Wyoming, to lick his wounds and try once again to maintain justice in a place with grudges that go back generations. When a shepherd is found dead, Longmire suspects it could be suicide. But the shepherd's connection to the Extepares, a powerful family of Basque ranchers with a history of violence, leads the sheriff into an intricate investigation of a possible murder.

As Walt searches for information about the shepherd, he comes across strange carvings on trees, as well as play money coupons from inside Mallo Cup candies, which he interprets as messages from his spiritual guide, Virgil White Buffalo. Longmire doesn't know how these little blue cards are appearing, but Virgil usually reaches out if a child is in danger. So when a young boy with ties to the Extepare clan arrives in town, the stakes grow even higher.

Even more complicating, a renegade wolf has been haunting the Bighorn Mountains, and the townspeople are out for blood. With both a wolf and a killer on the loose, Longmire follows a twisting trail of evidence, leading to dark and shocking conclusions.
Craig Johnson is the New York Times bestselling author of the Longmire mysteries, the basis for the hit Netflix original series Longmire. He is the recipient of the Western Writers of America Spur Award for fiction, the Mountains and Plains Booksellers Award for fiction, the Nouvel Observateur Prix du Roman Noir, and the Prix SNCF du Polar. His novella Spirit of Steamboat was the first One Book Wyoming selection. He lives in Ucross, Wyoming, population 25.
Praise for Land of Wolves


“It’s a taut, engrossing thriller from one of the most exciting voices in the genre . . . This is a smart, thoughtful mystery from an author who’s incapable of being boring, and who’s writing at the top of his game.” —Newsday


"Johnson’s affecting story is a winning combination of suspense, situational comedy and cosmic awe. We greatly admire the author’s hero, who never wavers, even when faced with the seemingly implausible.” —Wall Street Journal

“Witty dialogue, an endearing lead, and distinctive supporting characters all add up to a winner.” —Publishers Weekly

Praise for Craig Johnson and the Longmire series

“Like the greatest crime novelists, Johnson is a student of human nature. Walt Longmire is strong but fallible, a man whose devil-may-care stoicism masks a heightened sensitivity to the horrors he’s witnessed.”
—Los Angeles Times

“Johnson’s trademarks [are] great characters, witty banter, serious sleuthing, and a love of Wyoming bigger than a stack of derelict cars.”
—The Boston Globe

“Stepping into Walt’s world is like slipping on a favorite pair of slippers, and it’s where those slippers lead that provides a thrill. Johnson pens a series that should become a ‘must’ read, so curl up, get comfortable, and enjoy the ride.”
—The Denver Post

“Johnson’s hero only gets better—both at solving cases and at hooking readers—with age.”
—Publishers Weekly