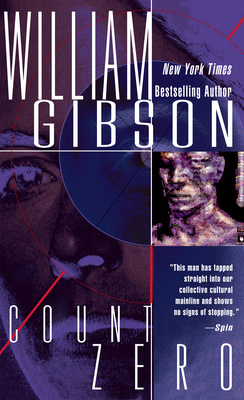 This is book number 2 in the Sprawl Trilogy series.

A stylish, street smart, frighteningly probable parable of the future from the visionary, New York Times bestselling author of Neuromancer and Agency.

A corporate mercenary wakes in a reconstructed body, a beautiful woman by his side. Then Hosaka Corporation reactivates him, for a mission more dangerous than the one he’s recovering from: to get a defecting chief of R&D—and the biochip he’s perfected—out intact. But this proves to be of supreme interest to certain other parties—some of whom aren’t remotely human...
William Gibson’s first novel, Neuromancer, won the Hugo Award, the Nebula Award, and the Philip K. Dick Award. He is the New York Times bestselling author of Count Zero, Burning Chrome, Mona Lisa Overdrive, Virtual Light, Idoru, All Tomorrow’s Parties, Pattern Recognition, Spook Country, Zero History, Distrust That Particular Flavor, The Peripheral, and Agency. He lives in Vancouver, British Columbia, with his wife.
“Potent and heady.”—Philadelphia Daily News

“An intriguing cast of characters and a tough, glitzy image of computer consciousness and the future of mankind.”—Richmond Times-Dispatch

“Suspense, action...a lively story...a sophisticated version of the sentient computer, a long way from the old models that were simply out to Rule the World.”—Locus