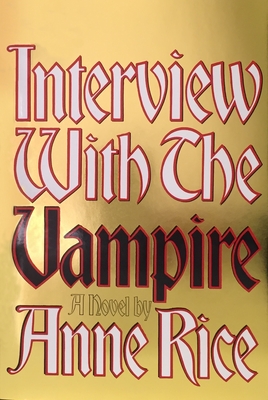 This is book number 1 in the Vampire Chronicles series.

40th ANNIVERSARY EDITION • From the #1 New York Times bestselling author, "a magnificent, compulsively readable thriller...Rice begins where Bram Stoker and the Hollywood versions leave off and penetrates directly to the true fascination of the myth—the education of the vampire” (Chicago Tribune). • The inspiration for the hit television series

The time is now.

We are in a small room with the vampire, face to face, as he speaks--as he pours out the hypnotic, shocking, moving, and erotically charged confessions of his first two hundred years as one of the living dead. . .

He speaks quietly, plainly, even gently . . . carrying us back to the night when he departed human existence as heir--young, romantic, cultivated--to a great Louisiana plantation, and was inducted by the radiant and sinister Lestat into the other, the "endless," life . . . learning first to sustain himself on the blood of cocks and rats caught in the raffish streets of New Orleans, then on the blood of human beings . . . to the years when, moving away from his final human ties under the tutelage of the hated yet necessary Lestat, he gradually embraces the habits, hungers, feelings of vampirism: the detachment, the hardened will, the "superior" sensual pleasures.

He carries us back to the crucial moment in a dark New Orleans street when he finds the exquisite lost young child Claudia, wanting not to hurt but to comfort her, struggling against the last residue of human feeling within him . . .

We see how Claudia in turn is made a vampire--all her passion and intelligence trapped forever in the body of a small child--and how they arrive at their passionate and dangerous alliance, their French Quarter life of opulence: delicate Grecian statues, Chinese vases, crystal chandeliers, a butler, a maid, a stone nymph in the hidden garden court . . . night curving into night with their vampire senses heightened to the beauty of the world, thirsting for the beauty of death--a constant stream of vulnerable strangers awaiting them below . . .

We see them joined against the envious, dangerous Lestat, embarking on a perilous search across Europe for others like themselves, desperate to discover the world they belong to, the ways of survival, to know what they are and why, where they came from, what their future can be . . .

We follow them across Austria and Transylvania, encountering their kind in forms beyond their wildest imagining . . . to Paris, where footsteps behind them, in exact rhythm with their own, steer them to the doors of the Théâtre des Vampires--the beautiful, lewd, and febrile mime theatre whose posters of penny-dreadful vampires at once mask and reveal the horror within . . . to their meeting with the eerily magnetic Armand, who brings them, at last, into intimacy with a whole brilliant and decadent society of vampires, an intimacy that becomes sudden terror when they are compelled to confront what they have feared and fled . . .

In its unceasing flow of spellbinding storytelling, of danger and flight, of loyalty and treachery, Interview with the Vampire bears witness of a literary imagination of the first order.
ANNE RICE is the author of thirty-seven books. She died in 2021.

“A magnificent, compulsively readable thriller . . . Rice begins where Bram Stoker and the Hollywood versions leave off and penetrates directly to the true fascination of the myth–the education of the vampire.”—Chicago Tribune

“If you surrender and go with her . . . you have surrendered to enchantment, as in a voluptuous dream.”—Boston Globe