The Savage: A Novel (Paperback) 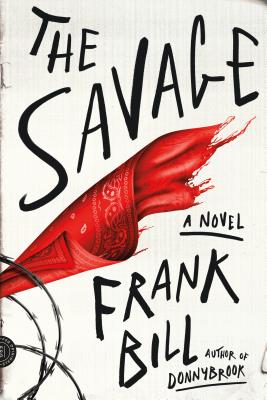 The Savage: A Novel (Paperback)

Imagine for a second, "What if the dollar became useless?"  Imagine the fallout that would follow. The Savage is Frank Bill's follow up to Donnybrook, a world where money has become useless, and it's become increasingly difficult to know the difference between right and wrong. (Side note: you don't need to have read Donnybrook to read this book)
We follow Van Dorn, a man raised by his father to respect the land and to respect righteousness above all else. There is a warlord named Cotto who has been stealing women and holding them hostage all over what used to be Indiana. Van Dorn has made it his personal mission to find and free these starving, beaten women. What follows is a bloody walk through the chaos of the end of the world. If you take The Road by Cormac McCarthy, sprinkle in a little bit of "Mad Max," and turn the voltage on high, you'll get close to The Savage.
— From Zach

In the raucous and action-packed follow-up to Donnybrook, mayhem is still the order of the day—only more so

The dollar has failed; the grid is wiped out. Walmarts are looted and homes are abandoned as common folk flee and bloodthirsty militias fight for power. In a twenty-first century America gone haywire, Darwinian struggle for survival is the law of the land.

Van Dorn, eighteen and running solo, was raised by his father in the old ways: to value survival, self-reliance, and righteousness. Determined to seek justice, he fights through a litany of horrors to save those captured by Cotto, a savage, drug-crazed warlord who has risen among the roving gangs, gaining territory while enslaving women and children. As destinies collide and survival becomes an increasingly distant fantasy, battling ideals of right and wrong come to an explosive head.

Chock-full of the razor-sharp prose and bloodlust that made Donnybrook impossible to put down, The Savage nonetheless finds Frank Bill raising the stakes. Here, one of America’s most iconoclastic young storytellers presents an unnerving vision of a fractured America gone terribly wrong, and a study of what happens when the last systems of morality and society collapse.

"Even more artfully barbaric than his previous works . . . The Savage is simply the latest glimpse out of Bill’s rather extraordinary window into an oft-overlooked world that’s anything but drab and rust-colored." —Kelly Dearmore, The Dallas Morning News

"[Bill] has perfected his literary formula: a stylized and extraordinarily violent version of the Southern Indiana he knows." —Craig Fehrman, Indianapolis Monthly

"A dark, dreary, gut punch of a novel . . . riveting . . . [these] are all things that feel too real, too close to home, and seemingly coming to a town near you sooner than we'd like." —Ryan Lee Price, Recoil / Offgrid

"With echoes of early Palahniuk, [The Savage] is part revenge thriller and part horror, while at heart it's about masculinity and fatherhood. An enjoyably blood-curling and unrelenting read with an even bleaker description of humanity's worse impulses than its predecessor, this is not for the faint of heart." —Booklist

"[Frank Bill] has hit his stride without losing the grit where his foundation is moored. In a grim, unforgiving world, Bill maps out a harrowing, raw beauty, providing that much-needed sliver of hope in humankind in The Savage." —David Cranmer, Criminal Element

"The nasty, violent world of Donnybrook returns with a vengeance . . . The pages are filled with dark energy and Technicolor gore . . . No lack of excitement in this well-told tale." —Kirkus

"More than just a relentless page-turner, this amazing novel made me consider the destructive forces that create and nurture much of the savagery plaguing our world. With The Savage we find Frank Bill at the height of his powers, penning a burning hot epic both thrilling and necessary, with depth of ambition and imagination, salt-of-the-earth characters to love and fear, all brought to life with searing prose both brutal and beautiful. I loved and admired this book, and feel Bill is one of the most interesting and influential writers working today." —Alan Heathcock, author of Volt

“Frank Bill’s prose is unmistakable in its ability to come off the page and grab you by the throat. The Savage is at once shattering and satisfying, a story forged from equal parts gravel and grace.” —David Joy, author of The Weight Of This World

“Frank Bill cuts straight to the raw real horror at the core of the American soul. This is a writer who never looks away, who never lets up, and who has rendered in exquisite, terrifying prose an apocalyptic country and those wounded souls who try to survive within it. Bloody and brilliant, relentless as a nightmare, The Savage is an unblinking look into the darkness we are heading for.” —Kent Wascom, author of The Blood of Heaven

“Think Margaret Atwood's The Handmaid's Tale set to the tune of Hank Williams Jr.'s Country Boy Can Survive. Inventive, clever and so topical of today's American divisiveness, The Savage is set to become one of the year's most discussed books. As compulsive and chilling as Cormac McCarthy's The Road." —Ace Atkins, author of The Fallen