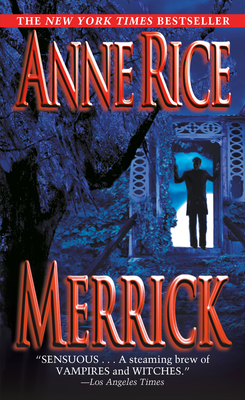 This is book number 7 in the Vampire Chronicles series.

In this mesmerizing new novel, Anne Rice demonstrates once again her gift for spellbinding storytelling and the creation of myth and magic, as she weaves together two of her most compelling worlds? those of the Vampire Chronicles and the Mayfair witches.

Anne Rice is the author of thirty-seven books, including the Vampire Chronicles, the Lives of the Mayfair Witches, and the Wolf Gift book series. Rice was born in New Orleans in 1941 and grew up there and in Texas. She lived in San Francisco with her husband, the poet and painter, Stan Rice until 1988, when they returned to New Orleans to live with their son, Christopher. In 2006, Rice moved to Rancho Mirage, California. She died in 2021.


“SPELLBINDING . . . LUXURIOUSLY LUSCIOUS . . . There is the promise of more chills to come.”
–USA Today

“[Merrick’s] greatest strength is Rice’s skill at constructing a believably eerie New Orleans overrun by the charismatic undead and those who wish to join them. . . . Its closing pages prime the stage for the continuing adventures of the beguiling Merrick and her new fanged pals. They will all be back, of course, and Merrick leaves you looking forward to their return.”
–The Boston Globe

“RICE AT HER CHILLING BEST.”
–The Seattle Times

“RICE’S PACE HAS RARELY BEEN BETTER. . . . For those already enthralled by Ms. Rice’s witches and vampires, Merrick will strengthen the spell. And for those who haven’t been . . . well, sucked in yet, Merrick proves a worthy initiation.”
–The Dallas Morning News