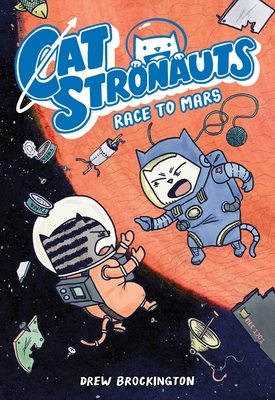 This is book number 2 in the CatStronauts series.

In the sequel to CatStronauts: Mission Moon, your favorite elite group of cat astronauts are thrust into the space-race of the century!

Fresh off of their heroic mission to save the world, the CatStronauts--Major Meowser, Pom Pom, Blanket and Waffles--are taking a well deserved victory lap. Parades and fancy awards dinners are the new norm!

But around the world, other cat space programs are watching--in particular the CosmoCats, the first cats to go to space! With national pride and scientific research on the line, the world's space programs rush to be the first cats to Mars, and the CatStronauts are starting months behind! Can they catch up and prove their first mission was no fluke?

In this graphic novel, debut author/illustrator Drew Brockington takes the CatStronauts further than they've every gone, adding in mounds of jokes, charm, science, and enough yarn and scratching posts for everyone!
Drew Brockington has flown a Space Shuttle, repaired the International Space Station, and served in Mission Control; all during a week at Space Camp. CatStronauts is his first series. He lives with his family in Minneapolis.

Praise for CatStronauts: A 2018 TLA Little Maverick Graphic Novel Reading List Book
"With its appealing blend of cuteness, substance, and humor, this should have readers over the moon. "—Kirkus Reviews

"The engagingly lighthearted drama and positive resolutions, and the expressive characters, who are as adorable as they are adventurous, provide... fun purchases that will do well on their own or paired with heavier nonfiction titles on history or the environment."

"Humor and suspense compete throughout... In playful, mock-heroic, full-color cartoons, Brockington mines space theater for everything.... Even the chapter headings get in on the fun."—Publishers Weekly